Sable wins the Best Cat in the Household Pet Category 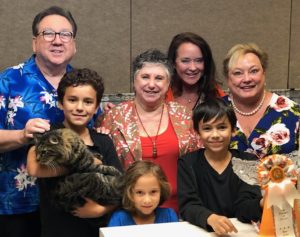 Sable wins the Best Cat in the Household Pet Category

Sable won Best Cat in the Household Pet category for the second time. Sable was adopted from Rainbow Friends Animal Sanctuary on February 16, 2017 for Sebastian’s 11th birthday. Sebastian is the one holding him in the picture. The adults are the four judges from the show.

CFA has become consistently throughout the years from its modest beginnings, authorizing two shows to permitting around 400 demonstrates each season, around the world. Enrollment in CFA is conceded to clubs who have experienced an application and election process. As of now, CFA has more than 600 member clubs. CFA shows are judged by individuals who have met high qualification criteria and have finished a thorough preparation program which qualifies the judges to assess the show felines utilizing a CFA Breed Standard for every single one of its 42 breeds. To date, CFA has enlisted more than 2 million pedigreed felines.

This website uses cookies to improve your experience while you navigate through the website. Out of these cookies, the cookies that are categorized as necessary are stored on your browser as they are essential for the working of basic functionalities of the website. We also use third-party cookies that help us analyze and understand how you use this website. These cookies will be stored in your browser only with your consent. You also have the option to opt-out of these cookies. But opting out of some of these cookies may have an effect on your browsing experience.
Necessary Always Enabled
Necessary cookies are absolutely essential for the website to function properly. This category only includes cookies that ensures basic functionalities and security features of the website. These cookies do not store any personal information.
Non-necessary
Any cookies that may not be particularly necessary for the website to function and is used specifically to collect user personal data via analytics, ads, other embedded contents are termed as non-necessary cookies. It is mandatory to procure user consent prior to running these cookies on your website.
SAVE & ACCEPT
Go to Top